This year, the anticipation around Singles Day was all-pervasive, and the sale was widely expected to break all records, as more than 60,000 global brands queued up to participate. By the end of the day, sales topped $25.3 billion, while shattering last year’s record by lunchtime.

It’s an astonishing feat of retailing, eight years in the making. When Alibaba first started 11.11 in 2009, they set out strategically to try and convert shopping into a sport, infusing it with a strong element of entertainment. “Retail as entertainment” is a unique central theme for 11.11 and this year Alibaba leveraged its media and eCommerce platforms in concert to create an entirely immersive experience for viewers and consumers alike.

From a technology perspective, the “See Now, Buy Now” fashion show and the pre-sale gala seamlessly merged offline and online shopping so viewers tuning in to both shows can watch them while simultaneously shopping via their phones or saving the items for a later date.

Of course, attractive discounts on its eCommerce platforms were on offer as well.

At DataWeave, we have been analyzing the major sale events of several eCommerce companies from around the world. During Singles Day, when we trained our data aggregation and analysis platform on Taobao.com (Alibaba’s B2C eCommerce arm), and its competitors JD.com and Amazon.ch, our technology platform and analysts had to overcome two primary challenges:

1. All text on these websites were in Chinese

All information — names of products, brands, and categories — were displayed in Chinese. However, our technology platform is truly language agnostic, capable of processing data drawn from websites featuring all international languages. Several of our customers have benefited strategically from this unique capability.

2.  Discounted prices were embedded in images on Taobao.com 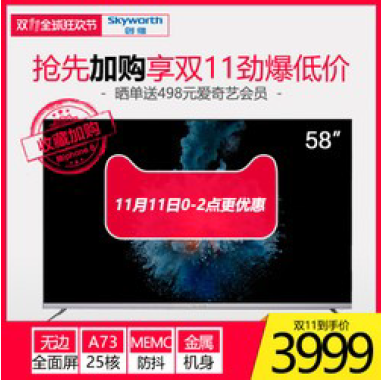 While it’s normal for sale prices to be represented in text on a website (relatively easy to capture by our advanced data aggregation system), Taobao chose to display these prices as part of its product images — like the one shown in the adjacent image.

However, our technology stack comprises of an AI-powered, state-of-the-art image processing and analytics platform, which quickly extracted the selling prices embedded in the images at very high accuracy.

We analyzed the Top 150 ranked products of over 20 product types , spread across Electronics, Men’s Fashion, and Women’s Fashion, representing over 25,000 products in total, each day, between 8.11 and 12.11.

In the following infographic, we analyze the absolute discounts offered by Taobao on 11.11, compared to 8.11 (based on pricing information extracted from the product images using our image analytics platform), together with an insight into the level of premium products included in their mix for each product type, between the two days of comparison.

Unexpectedly, we noticed that each day, ALL the products in the Top 150 ranks differed from the previous day — a highly unique insight into Taobao’s unique assortment strategy. 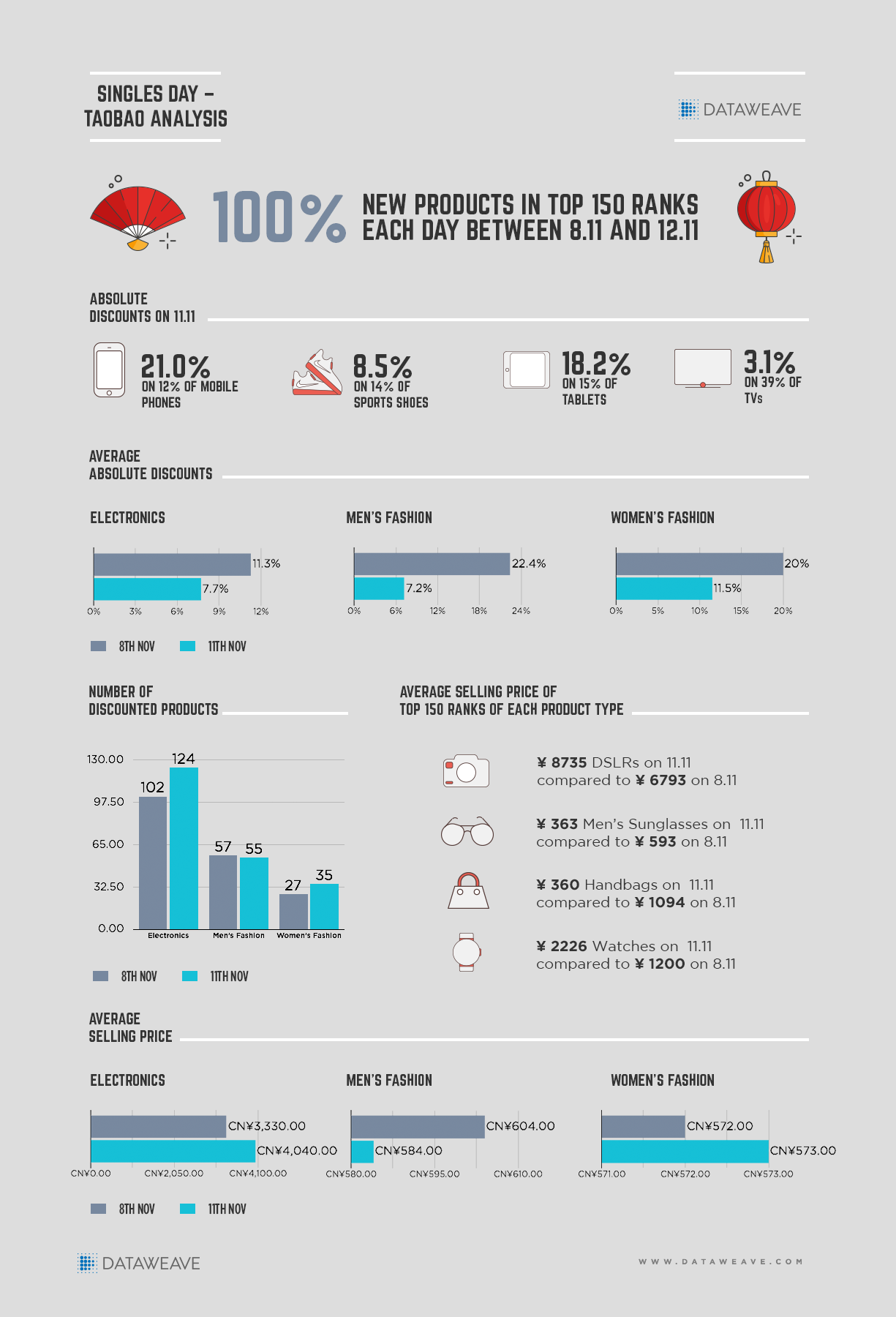 Counter-intuitively, absolute discounts across all categories were considerably higher on 8.11 than on 11.11, even if it were for a marginally fewer number of products. The number of discounted Electronics products on sale rose on 11.11 compared to 8.11 (124 versus 102 respectively), while there was little movement in the number of discounted Men’s Fashion(55 versus 57) and Women’s Fashion (35 verses 27) products.

It’s clear that even with all the fanfare, Singles Day didn’t produce the level of discounts that one might have expected, indicating that purchases were driven as much by the hype surrounding the event as anything else.

How did Alibaba’s Competitors Fare?

While Taobao was widely expected to offer discounts during Alibaba’s major sale event, we looked at how its competitors JD.com and Amazon.ch reacted to Taobao’s strategy.

As over 80 percent of top-ranked products were consistently present in the Top 150 ranks of each product type on these websites, we analyzed the additional discounts offered during 11.11, compared to prices on 8.11. 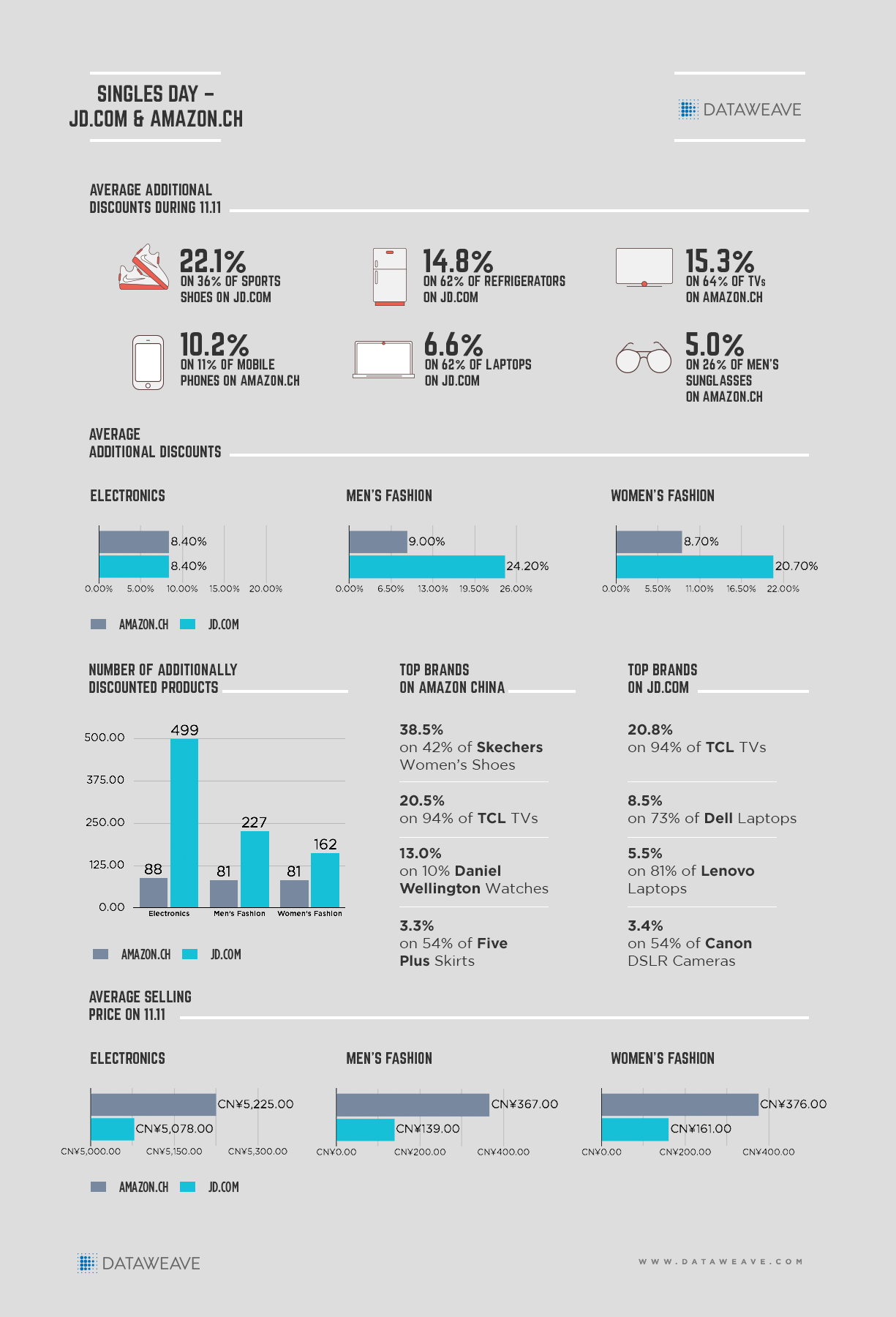 Broadly speaking, both Amazon.ch and JD.com appear to have elected not to go head to head with Taobao on specific segments. JD.com’s discount strategy was spearheaded by Sports Shoes (22.1 percent) and Refrigerators (14.8 percent) while Amazon.ch featured TVs (15.3 percent) and Mobile Phones (10.2 percent).

The average additional discounts offered by Amazon.ch and JD.com in Electronics (8.4 percent) was slightly above Taobao’s overall absolute discount (7.7 percent). TCL was aggressive with its pricing on both websites, offering over 20% discount on almost its entire assortment.

Surprisingly, JD.com swamped Amazon.ch’s number of additionally discounted products, across all three featured categories although this may be partially explained by Amazon.ch electing to adopt a significantly more premium price position in both Men’s and Women’s Fashions compared to JD.com, while remaining roughly line ball on Electronics.

Interestingly, JD.com wasn’t far behind Taobao in terms of sales, clocking up $20 billion in revenue, and sparking an interesting public debate between the two eCommerce giants extolling their respective performances.

Singles Day is one of the pillars of Jack Ma’s vision of a “New Retail” represented by the merging of entertainment and consumption. Ma’s vision sees the boundary between offline and online commerce disappearing as the focus shifts dramatically to fulfilling the personalized needs of individual customers.

Hence, Alibaba’s Global Shopping Festival should be understood as not just a one-day event that produces massive revenue, but as a demonstrable tour de force of Alibaba’s vision for the future of retail. One thing is certain — as competition heats up between Chinese retailers, we can be prepared for another Singles Day shoot-out sale next year that one-ups the staggering sales volumes this year.

If you’re intrigued by DataWeave’s technology, check out our website to learn more about how we provide Competitive Intelligence as a Service to retailers and consumer brands globally.

11 Reasons why your eCommerce Business is failing...