How to Win the Coveted Amazon Buy Box | DataWeave

Did you know that over 80% of purchases on Amazon.com is via the buy box?

While Amazon is all the rage today, raking in 43% of all eCommerce dollars, thousands of merchants on the online marketplace look to seize every opportunity to attract shoppers and drive sales each day. And for these merchants, getting on the buy box is more than half the battle won.

Recently, Forbes.com published our study of how online merchants can plot their strategy to win the buy box. In this article, we’ll explore some of the key takeaways from this study.

What is the Amazon buy box?

The buy box is the section on the right side of Amazon’s product page, where shoppers can add items for purchase to their cart. Since multiple merchants often offer the same product, they compete to win the buy box spot on the product page, which is where customers typically begin the purchasing process — a huge competitive advantage.

How can merchants win the buy box spot?

At DataWeave, we aggregate and analyze billions of data points from the Web to deliver Competitive Intelligence as a Service to retailers and consumer brands. Using our proprietary technology platform, we aggregated data for a large sample of products in the mobile phones, clothing, shoes and jewelry categories on Amazon and collected information on all merchants (over 700 in number) selling these product over a period of 10 days.

We looked closely at several factors that could possibly impact the choice for the buy box:

We parsed through the data to unearth some interesting insights and found that some factors influenced the move to the buy box spot more than others. 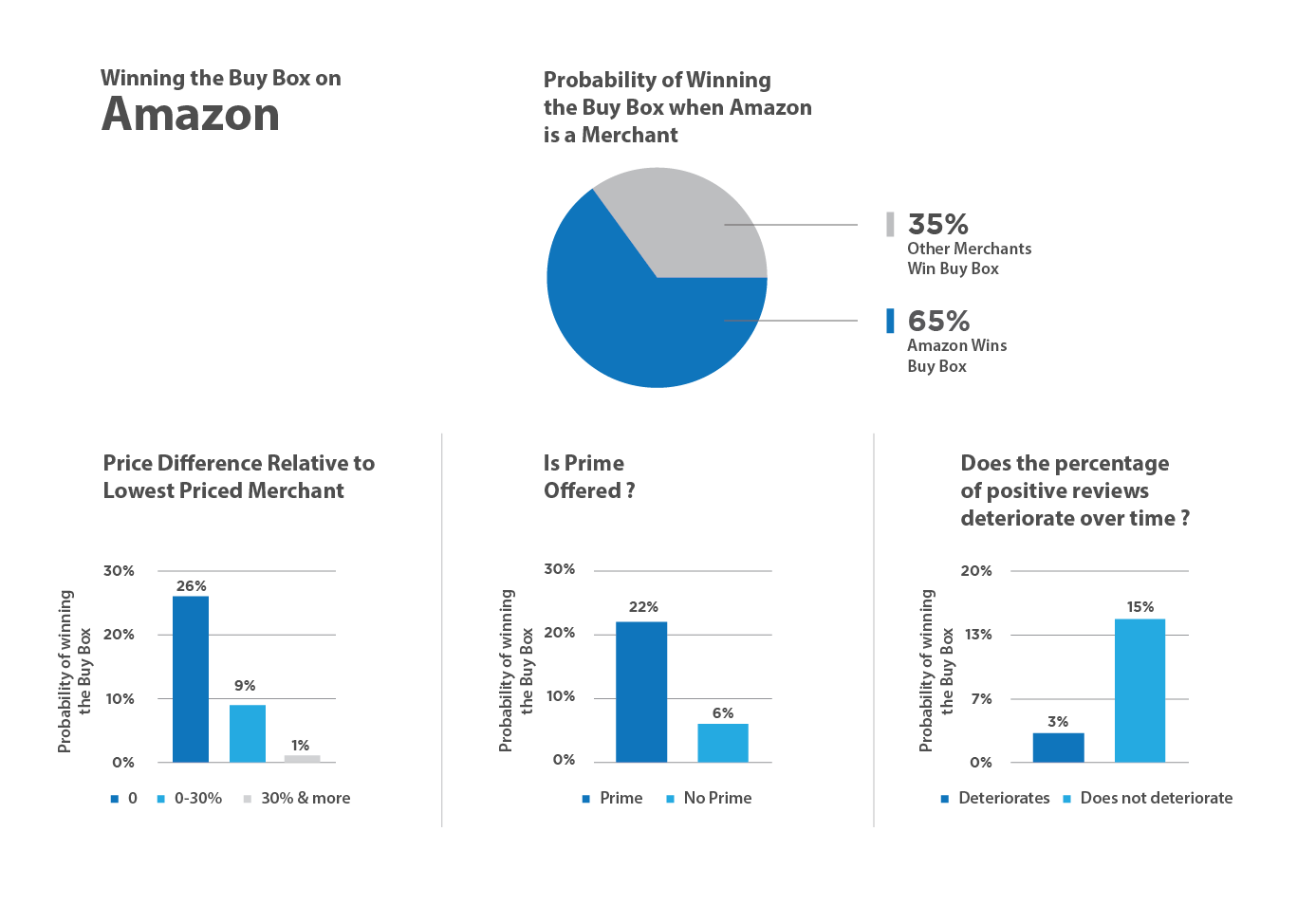 We see that when Amazon is a merchant, it’s twice as likely to win the buy box compared to other merchants. Further analysis revealed that for around 95% of instances where Amazon was a merchant but was NOT the in the buy box, Amazon was selling at a price 20% greater than the minimum price.

When the effective price is the lowest, relative to other merchants, the chances of the merchant winning the buy box increased 2.5-fold. Essentially, for the set of merchants who were the lowest priced for each product, only 26% of them won the buy box.

Merchants who provided Prime benefits to shoppers were 3.5 times more likely to win compared to other merchants. And lastly, if the percentage of positive reviews for a merchant are decreasing over time, the merchant is 5X less likely to win. All other factors analyzed failed to yield statistically significant results.

Interestingly, no single factor played an overwhelming role in influencing the buy box criteria. So, with the help of statistical modelling, which considers and weighs all factors, we better understood the relationship between all factors, and traced a path for merchants to win the buy box.

While it isn’t quite possible to develop a fool proof framework, the following flowchart can act as a fairly useful guide. 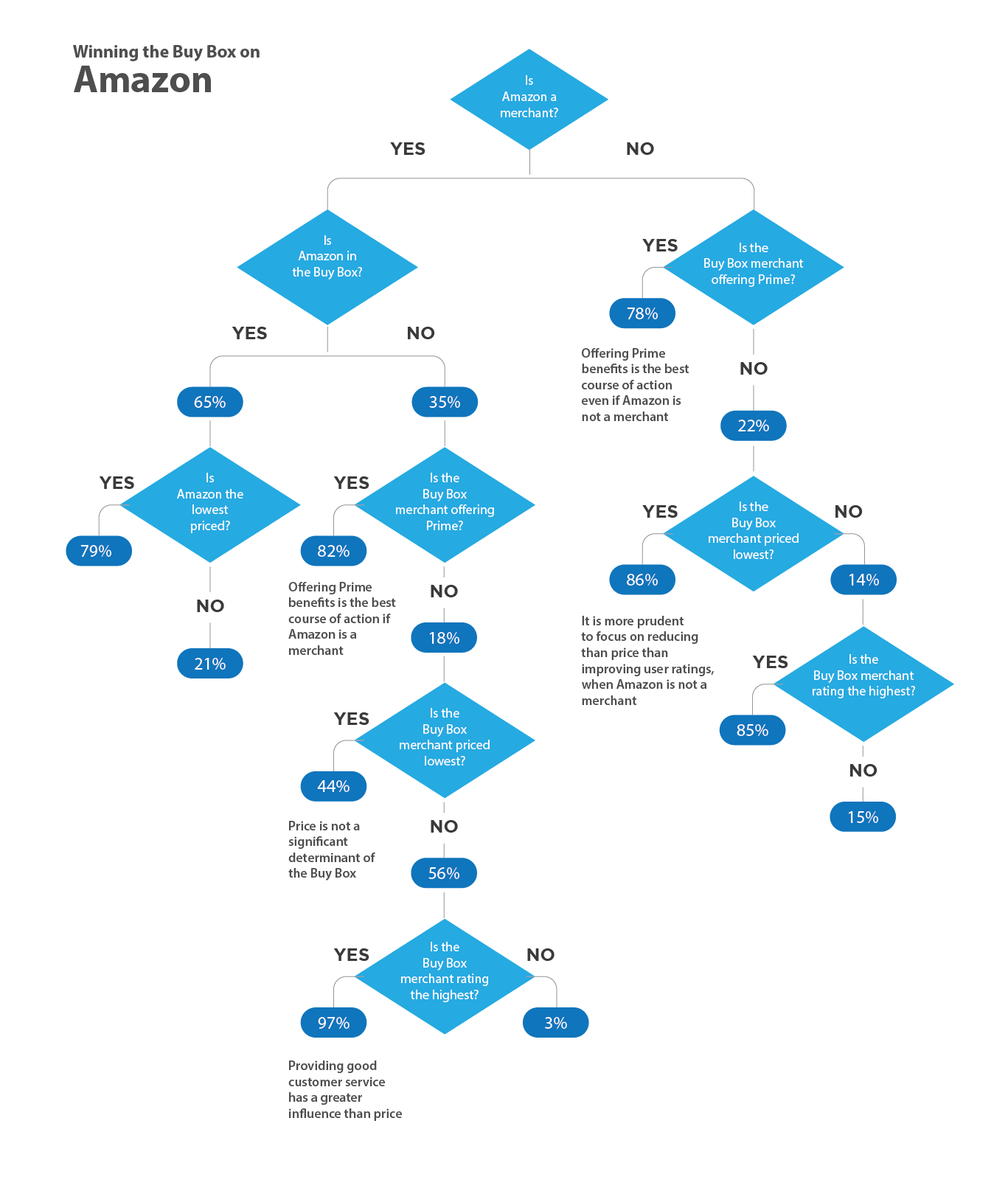 Clearly, the path to the buy box is not a straightforward one.

When Amazon is not a merchant for a product, and competition is only between third-party merchants, offering Prime benefits is still the most influential factor (78%). When Prime isn’t offered, the price is the primary determinant of the buy box merchant (86%).

Evidently, reducing the price is not always the best course of action. It appears that offering Prime benefits has the biggest impact on a merchant’s chances of winning the buy box, across various scenarios.

However, it’s important to keep in mind that moving up the “merchant ladder” is a gradual process, based on how merchants perform consistently over time.

If you’re interested to learn more about DataWeave’s technology, and how we help retailers and consumer brands optimize their online strategies, visit our website!

According to the Statista Fashion eCommerce report 2021, the compound annual gro...

UK Grocery Pricing Wars in 2022! A quick look at Pricing Data we gathered from 5...

Understand the insights on who is winning the grocery pricing wars in the UK fo...

According to our preliminary analysis of Prime Day 2020, Amazon’s rivals offer...