Without argument, one of the most common used data model is JSON. There are two popular packages used for handling json — first is the stockjsonpackage that comes with default installation of Python, the other one issimplejson which is an optimized and maintained package for Python. The goal of this blog post is to introduce ultrajson or Ultra JSON, a JSON library written mostly in C and built to be extremely fast.

We have done the benchmark on three popular operations — load, loadsanddumps. We have a dictionary with 3 keys — id, name and address. We will dump this dictionary using json.dumps() and store it in a file. Then we will use json.loads() and json.load() separately to load the dictionaries from the file. We have performed this experiment on 10000, 50000, 100000,200000, 1000000 dictionaries and observed how much time it takes to perform the operation by each library.

Here is the result we received using the json.dumps() operations. We have dumped the content dictionary by dictionary.

We notice that json performs better than simplejson but ultrajson wins the game with almost 4 times speedup than stock json.

DUMPS OPERATION (ALL DICTIONARIES AT ONCE)

In this experiment, we have stored all the dictionaries in a list and dumped the list using json.dumps().

simplejson is almost as good as stock json, but again ultrajson outperforms them by more than 60% speedup. Now lets see how they perform for load and loads operation.

Now we do the load operation on a list of dictionaries and compare the results. 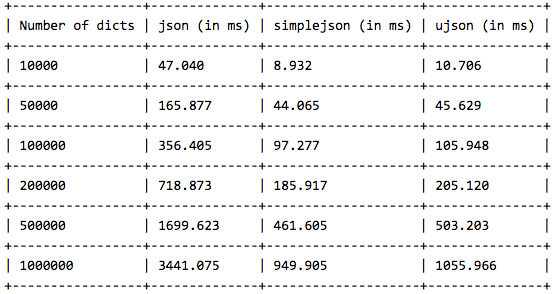 In this experiment, we load dictionaries from the file one by one and pass them to the json.loads() function.

That is all the benchmarks we have here. The verdict is pretty clear. Use simplejson instead of stock json in any case, since simplejson is well maintained repository. If you really want something extremely fast, then go for ultrajson. In that case, keep in mind that ultrajson only works with well defined collections and will not work for un-serializable collections. But if you are dealing with texts, this should not be a problem.

Product Taxonomy and its importance in retail Every product on a retail website ...

How to respond to Negative Online Reviews...

Learn how to address negative reviews and nudge customers towards building trust...

[INFOGRAPHIC] 2020: The Year the World Navigated Uncertainty Together...

The start of 2020 brought with it the promise of global economic growth. Markets...