Smartphones vs Tablets: Does size matter?

We, at DataWeave, deal with millions of data points related to products which vary from electronics to apparel. One of the main challenges we encounter while dealing with this data is the amount of noise and variation present for the same products across different stores.

One particular problem we have been facing recently is detecting whether a particular product is a mobile phone (smartphone) or a tablet. If it is mentioned explicitly somewhere in the product information or metadata, we can sit back and let our backend engines do the necessary work of classification and clustering. Unfortunately, with the data we extract and aggregate from the Web, chances of finding this ontological information is quite slim.

To address the above problem, we decided to take two approaches.

Here we will talk mainly about the second approach since it is more challenging and engaging than the former. To start with, we needed some data specific to phone models, brands, sizes, dimensions, resolutions and everything else related to the device specifications. For this, we relied on a popular mobiles/tablets product information aggregation site. We crawled, extracted and aggregated this information and stored it as a JSON dump. Each device is represented as a JSON document like the sample shown below.

From the above document, it is clear that there are a lot of attributes that can be assigned to a mobile device. However, we would not need all of them for building our simple algorithm for labeling smartphones and tablets. I had decided to use the device screen size for separating out smartphones vs tablets, but I decided to take some suggestions from our team. After sitting down and taking a long, hard look at our dataset, Mandar had an idea of using the device dimensions also for achieving the same goal!

Finally, the attributes that we decided to use were,

Screen sizeI wrote some regular expressions for extracting out the features related to the device screen size and resolution. Getting the resolution was easy, which was achieved with the following Python code snippet. There were a couple of NA values but we didn’t go out of our way to get the data by searching on the web because resolution varies a lot and is not a key attribute for determining if a device is a phone or a tablet.

However, I noticed that I was getting a lot of ‘NA’ values for many devices. On looking up the same devices online, I noticed there were three distinct patterns with regards to screen size. They are,

Thus, the earlier logic for extracting screen size had to be modified and we used the following code snippet. We had to take care of multiple cases in our regexes, because the data did not have a consistent format.

Thus, the earlier logic for extracting screen size had to be modified and we used the following code snippet. We had to take care of multiple cases in our regexes, because the data did not have a consistent format.

Mandar helped me out with extracting the ‘dimensions’ attribute from the dataset and performing some transformations on it to get the total volume of the phone. It was achieved using the following code snippet.

We used PrettyTable to output the results in a clear and concise format.

Next, we stored the above data in a csv file and used Pandas, Matplotlib, Seaborn and IPython to do some quick exploratory data analysis and visualizations. The following depicts the top ten brands with the most number of mobile devices as per the dataset.

Then, we looked at the device area frequency for each brand using boxplots as depicted below. Based on the plot, it is quite evident that almost all the plots are right skewed, with a majority of the distribution of device dimensions (total area) falling in the range [0,150]. There are some notable exceptions like ‘Apple’ where the skew is considerably less than the general trend. On slicing the data for the brand ‘Apple’, we noticed that this was because devices from ‘Apple’ have an almost equal distribution based on the number of smartphones and tablets, leading to the distribution being almost normal. 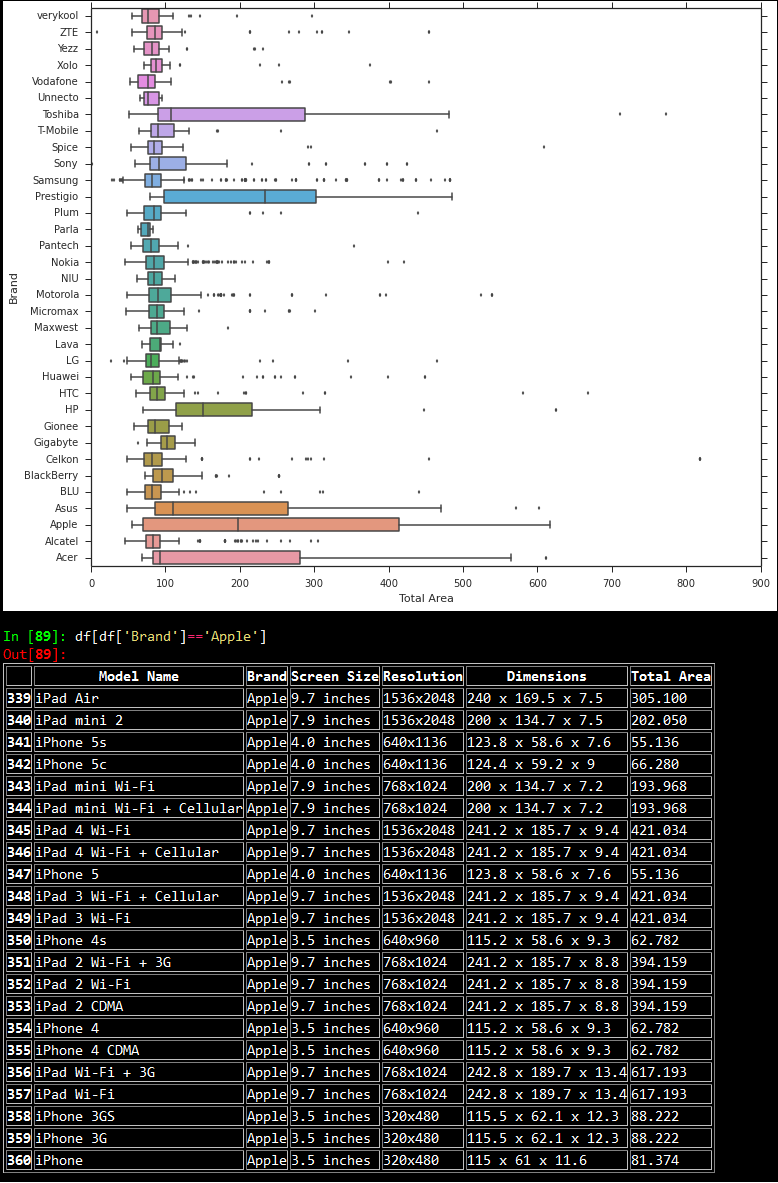 Based on similar experiments, we noticed that tablets had larger dimensions as compared to mobile phones, and screen sizes followed that same trend. We made some quick plots with respect to the device areas as shown below.

Now, take a look at the above plots again. The second plot shows the distribution of device areas in a kernel density plot. This distribution resembles a Gaussian distribution but with a right skew. [Mandar reckons that it actually resembles a Logistic distribution, but who’s splitting hairs, eh? ;)] The histogram plot depicts the same, except here we see the frequency of devices vs the device areas. Looking at it closely, Mandar said that the bell shaped curve had the maximum number of devices and those must be all the smartphones, while the long thin tail on the right side must indicate tablets. So we set a cutoff of 160 cubic centimeters for distinguishing between phones and tablets.

We did get a high correlation between Screen Size and Device Area. However, I still wanted to investigate why we didn’t get a score close to 90%. On doing some data digging, I noticed an interesting pattern.

After looking at the above results, what came to our minds immediately was: why do phones with such small screen sizes have such big dimensions? We soon realized that these devices were either “feature phones” of yore or smartphones with a physical keypad! 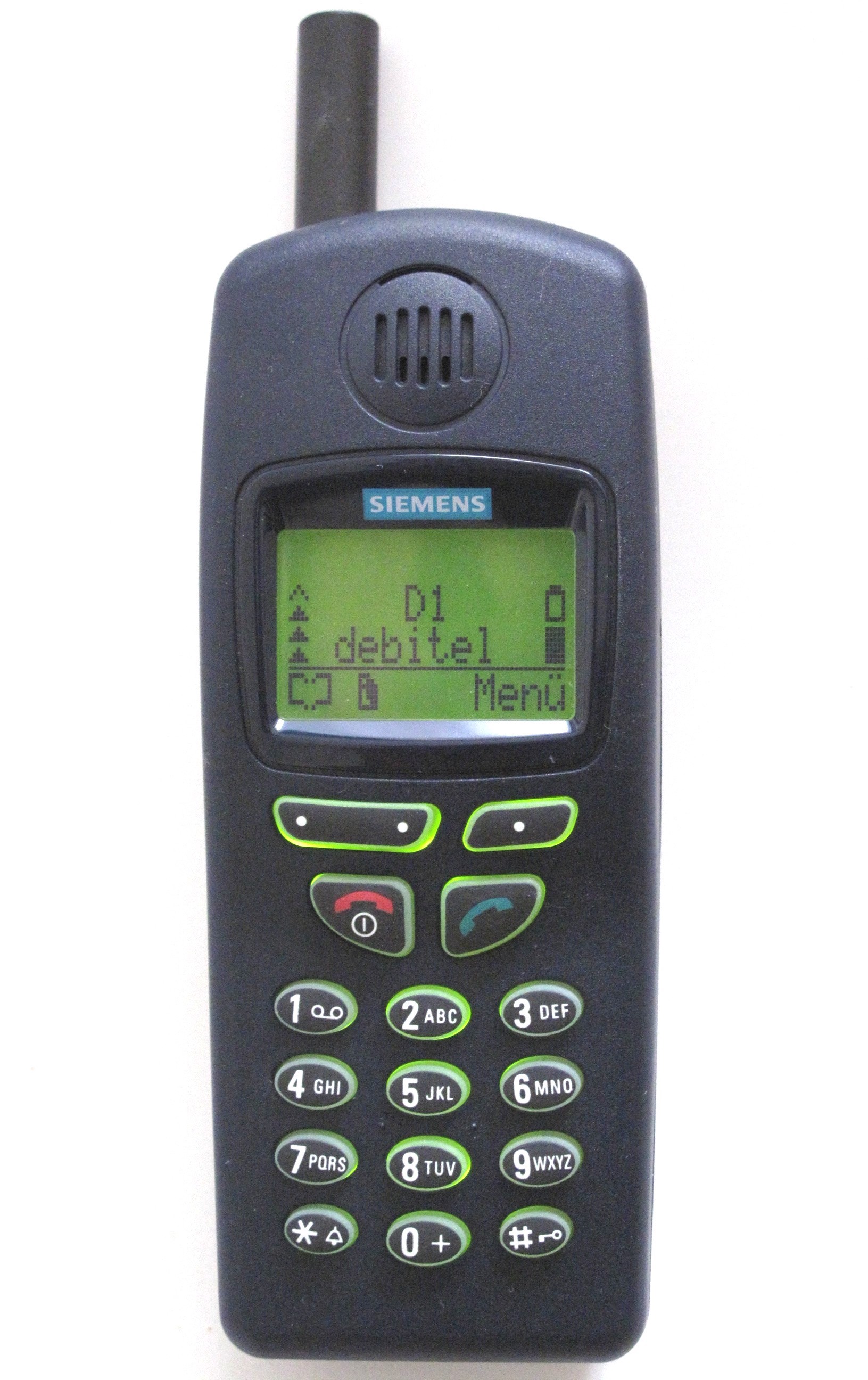 Thus, we used screen sizes in conjunction with dimensions for labeling our devices. After a long discussion, we decided to use the following logic for labeling smartphones and tablets.

After all this fun and frolic with data analysis, we were able to label handheld devices correctly, just like we wanted it!

How VCs and Brand Rollups are using Data for faster Acquisitions...

The explosive growth of online shopping has forced brands to re-examine their e-...

Are Your Digital Shelves Prepared for Green Monday?...

Green Monday falls on the second Monday of December and has historically been on...