A Study of Fashion Retail Pricing Across Thanksgiving, Black Friday and Cyber Monday 2018

The biggest holiday sale event of the western retail calendar — the Thanksgiving weekend sale, which includes Thanksgiving Day, Black Friday, and Cyber Monday — came and went a few weeks ago and made a huge splash along the way. While the sale event, especially Black Friday, is traditionally an offline sale event, modern online retailers too step up to offer products at attractive prices through this period.

Online retail sales numbers grew at an impressive clip based on stats reported by Adobe Analytics. Thanksgiving Day sale itself generated $3.7 billion in sales, up 28 percent from a year ago. Black Friday delivered a record $6.22 billion in online sales — a substantial leap of 23.6 percent year on year. Cyber Monday sales online generated a new record of $7.9 billion, up nearly 18 percent from last year.

Spending on fashion specifically was up 5.4 percent over the 2018 Black Friday weekend, the best growth seen since 2011, according to consulting firm Customer Growth Partners. Apparel retailers now book nearly a quarter of their annual sales during these holiday sales — a measure of just how important these annual sales have become to the online retailer’s commercial performance.

As a provider of Competitive Intelligence as a Service to retailers and consumer brands, DataWeave consistently monitors and captures pricing and assortment information from leading retailer websites during sale events to study their product and pricing strategies — and we’ve done the same for this year’s Thanksgiving weekend sale as well.

We tracked the pricing of 6 leading fashion retailers to study their pricing and product strategies during the sale events. Our analysis focused on additional discounts offered during the sale to evaluate the true value of the sale event to customers. To calculate this effect, we compared the pricing of products on Thanksgiving Day, Black Friday and Cyber Monday to the pricing of products prior to the sale commencing. We considered the Top 500 ranked products on 15 product types across Men’s and Women’s Fashion for this analysis.

Macy’s and Bloomingdale’s featured prominently among the top discounting retailers. This is unsurprising, given their focus on Fashion. Macy’s, in particular, additionally discounted just over half its fashion assortment over the three days. This was an order of magnitude greater than its nearest competitor Amazon at 29 percent.

Target and Walmart too discounted aggressively on Thanksgiving and Black Friday. Target exceeded Macy’s by 2 percentage points. However, Target and Walmart rolled back their discounts on Cyber Monday effectively halving them.

Walmart’s discount strategy displayed significant variation across the 3 days of sale. On Black Friday, Walmart led the retailing pack with its 46 percent discount only to roll back to 15% on Cyber Monday. The fluctuations in these discounts reflect significant variation and churn in Walmart’s Top 500 ranked products across the three days of sales.

As we have seen in previous sales, Amazon was a model of consistency in its discount strategy across the three days, maintaining a healthy 15% — 16% on roughly a third of its assortment. Strikingly, Newegg elected not to compete too aggressively in Fashion this year, adopting high single digit discounts on a similar percentage of its products.

Across all six retailers, Shirts, Jeans, and T-shirts proved to be the most popular product types in terms of additional discounts although accessories such as sunglasses (Newegg) and watches (Macy’s) broke up apparel’s dominance.

We also studied the variation of discounts across ranges of product “premiumness”. We generated a percentile scale based on price ranges of products from before the sale, and studied the additional discounts offered for products in these price range buckets during the sale. A percentile score or 1 is the cheapest product and 100 is the most expensive product. All of these metrics were calculated first at a product type level and then aggregated at an overall level for each retailer.

Amazon and Target display a clear strategy to additionally discount their more affordable range of products – those in the 1–20 cluster.

Bloomingdale’s showed a less structured strategic approach. Its additional discounts were largely spread evenly across levels. Its product churn among the Top 500 items during the sale focused on its more expensive products as indicated by its score of 0 for the 81–100 percentile bracket.

Macy’s opted to discount even more evenly across the board than Bloomingdale’s. It’s likely Macy’s relied on a different lever to drive discounts strategically. Walmart’s pricing approach was markedly uneven and all over the board from a strategic perspective.

One of the most interesting patterns to emerge from these sale events was the marked difference in discounting strategy adopted for Women’s Fashion compared to Men’s Fashion. Both Amazon and Macy’s discounted their Women’s Fashion line up far less aggressively than their Men’s Fashion products. Their discounts also applied to a smaller set of products.

The top product types additionally discounted were also not unexpectedly different between the Men’s and Women’s Fashion products. Skirts, Shoes, and Tops emerged as the favorite product types to discount, although no two retailers had the same discounting emphasis.

As with Women’s Fashion, Amazon and Target discounted their less expensive products more consistently. However, in Women’s Fashion, they were joined by Walmart and to a lesser degree, Newegg.

This showed evidence of a strategy to retail the less expensive products at more attractive price points to generate the price perception of being low-priced. Meanwhile, they continued to harvest comparatively more margin through their more expensive products. This was a more nuanced approach to margin management than what we saw in Men’s Fashion.

Does product visibility correlate with discounts? 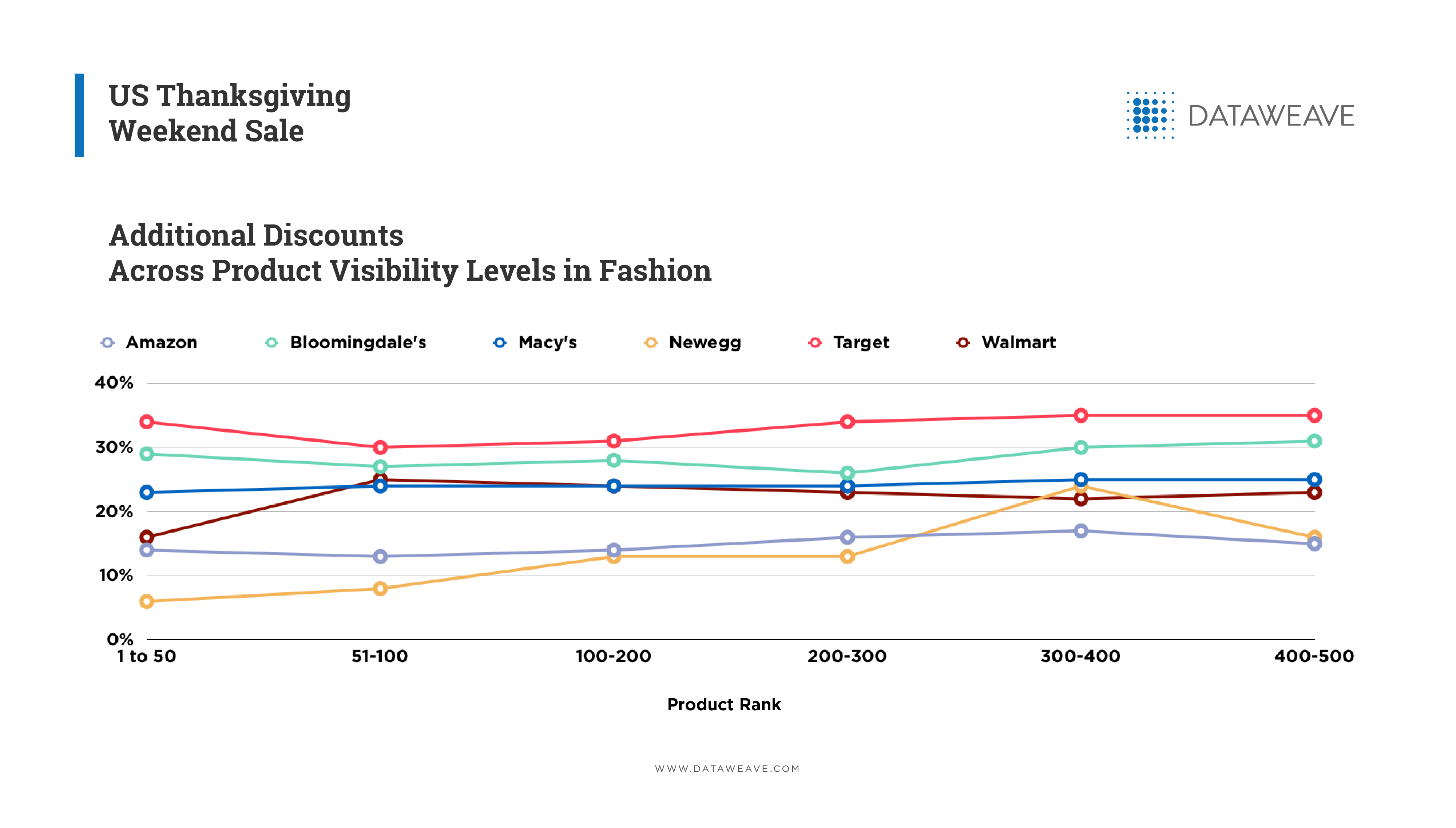 One working hypothesis is that products discounted heavily tend to have higher visibility to drive the perception of lower price. However, the results of our analysis appear counter-intuitive.

A closer look at Amazon.com

We extracted data on Amazon’s reviews and ratings to investigate its discounting strategy across ranges of product popularity — a measure that’s defined using a combination of average review rating and number of reviews. We compiled a measure of all products that were rated as High, Medium, and Low cohorts and evaluated Amazon’s discounting strategy in each cohort.

In Men’s Fashion, Amazon aggressively discounted its Medium and Low rated products on Thanksgiving, only to switch its strategy the next day on Black Friday. This tactical switch was presumably intended to showcase Amazon’s well-reviewed products at attractive prices on Black Friday — a larger sale event.

By Cyber Monday, Amazon’s Medium reviewed products were back enjoying more aggressive discount levels, albeit the discount variance across all three cohorts was minor.

Amazon’s discounting strategy for its Men’s Fashion products was in stark contrast to its strategy in Women’s Fashion. Here, Amazon additionally discounted its High and Medium reviewed products on Thanksgiving. While there was no specific discernible pattern on Black Friday, Amazon’s discounting was most consistent across its three popularity cohorts on Cyber Monday.

We also looked at Amazon’s discounting activity across its private label products relative to other brands. Unsurprisingly, Amazon discounted its private label fashion products at an aggressive 30%, while the other brands benefited from, on average across all days and all categories, an additional 15% discount.

While traditionally the holiday shopping season sees a peak around Black Friday and Christmas, retailers are increasingly seeing the demand spread across the entirety of the sale season of November and December. As a result, retailers need to stay on their toes to drive increased sales and gain market share over an extended period of time.

Certainly, in 2018, we witnessed a more focused approach to mine margins in Women’s Fashion while still discounting aggressively. As expected, both Macy’s and Bloomingdale’s featured prominently in the discounting stakes while both Amazon and Target appeared to implement a more nuanced approach to juggling a reputation for low prices and driving increased margin.

If you’re curious about how DataWeave aggregates data from eCommerce data at massive to deliver actionable insights to retailers and consumer brands, check us out on our website!

As DataWeave continues to engage with brands and manufacturers of all sizes, a c...

In the aggressive business of online retail every detail you know about your com...

When DataWeave was founded in 2011, we set out to democratize data by enabling b...