Online holiday shopping (Nov-Dec) in the US for 2019 is projected to be $143.7B, a 14.1% increase from 2018. This sets a rather exciting stage for retail giants in the battle to claim market share. Interesting patterns emerge as each one tries to out-smart the other. Black Friday, in particular, is when most of the activity was expected to be concentrated.

Inevitably, consumer electronics had strong representation, according to research by Coresight. As traffic steers more towards online shopping, there’s an increased sense of comfort in purchasing big ticket items on an ecommerce platform. There are multiple reasons why electronics lead the race during the holiday season – easy to gift, personal indulgence, comparatively shorter shelf life and well, because who among us can really resist a gadget on sale.

In line with expectations during the season, there’s been a slew of generous discounts across the board. According to prior trends, Amazon was on course to be the lowest priced. In order to assess this, we decided to study a sample of 1000 products on Amazon and match them against its competitors like Walmart, Target, Best Buy and New Egg. Doing this gave us an accurate picture of the comparative pricing across retailers during this season, right up to Black Friday.

There is a commonly held assumption that Amazon is the lowest priced retailer in most cases. How true is that? Here are our findings: 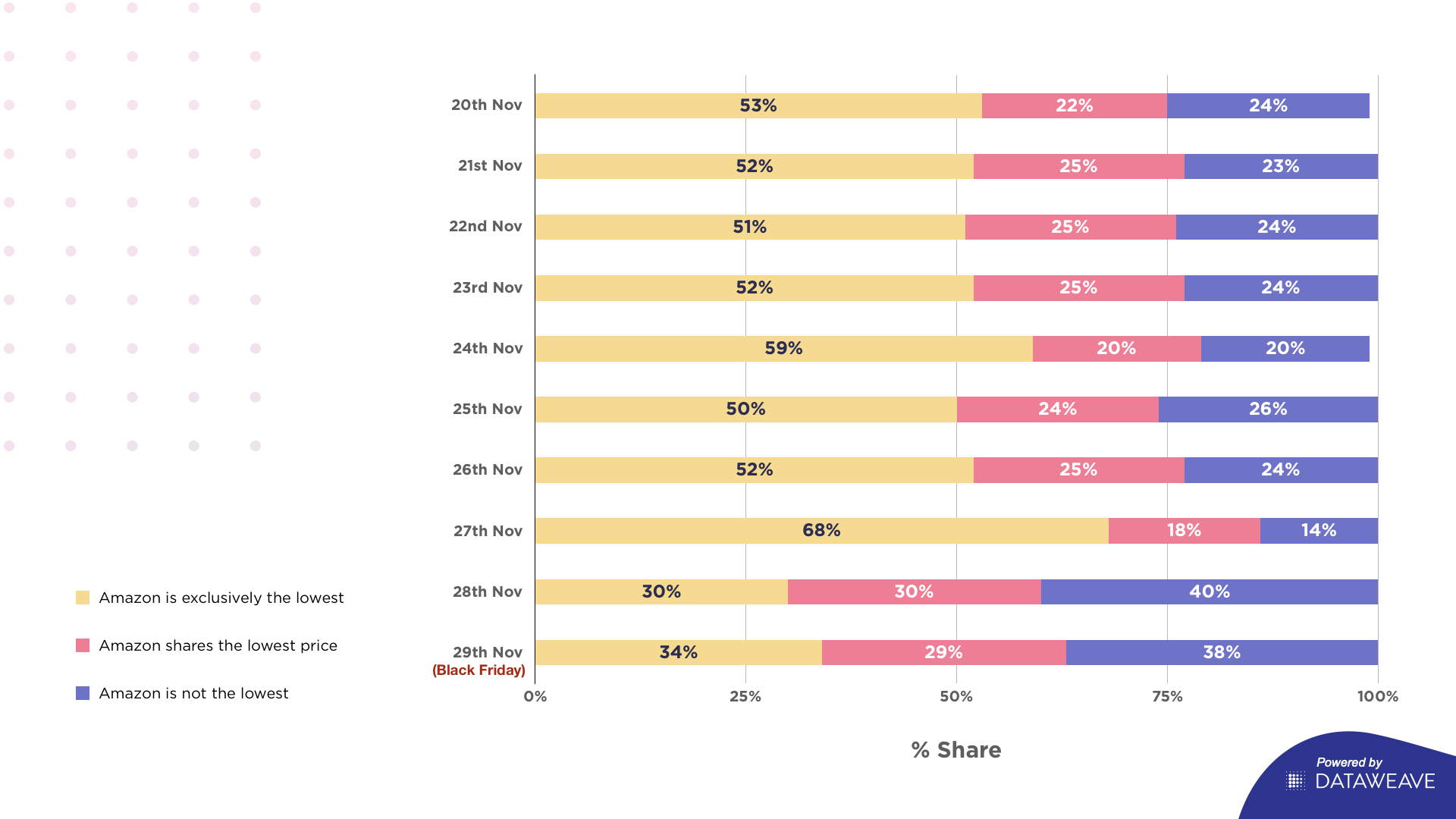 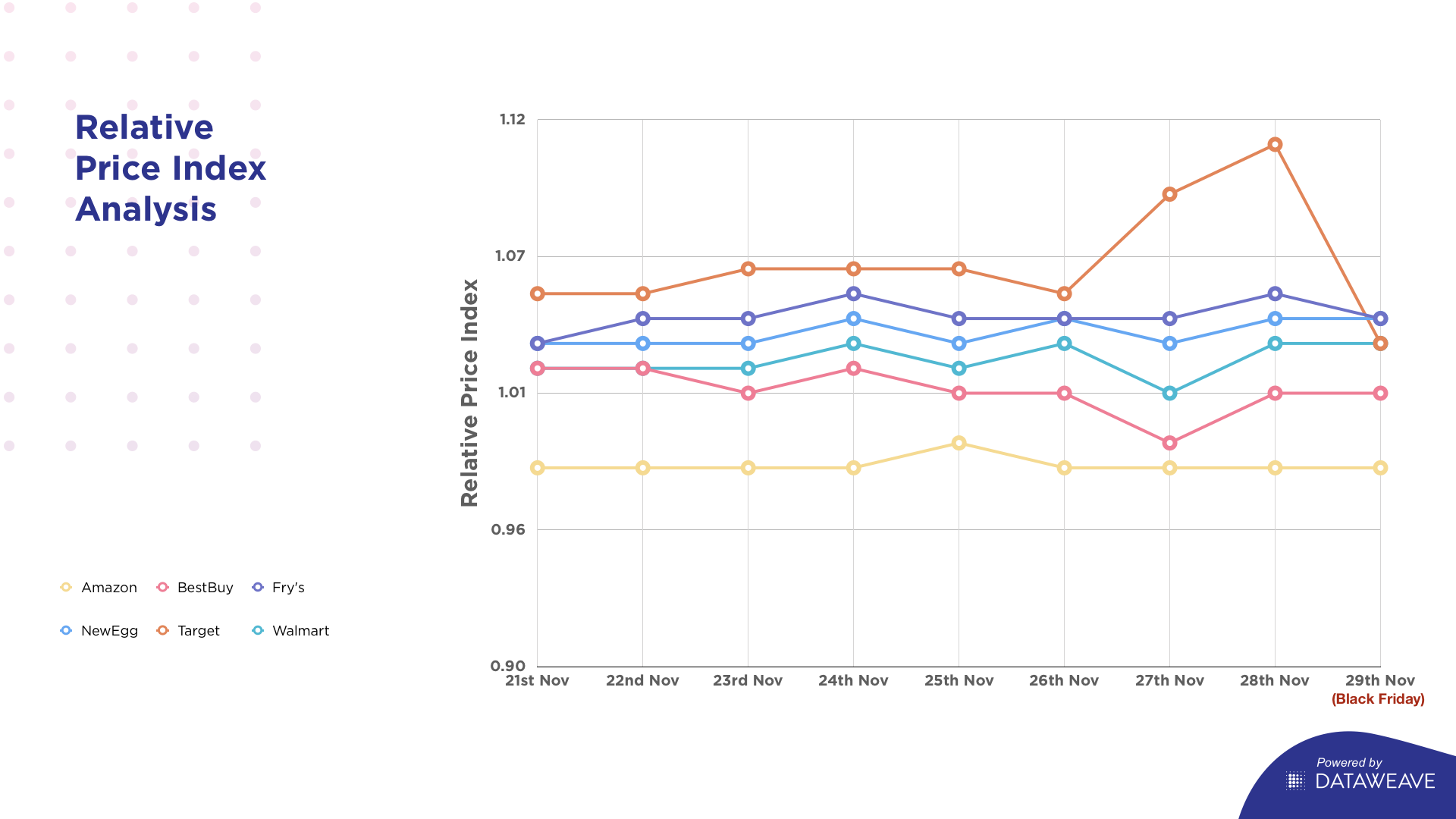 Unsurprisingly, Amazon has been consistently the lowest priced by a fair margin. A few rungs down, New Egg and Fry’s have been going head-to-head with their price positions. Target on the other hand, underwent a spike in relative pricing from 26-28 November. To sum up, in order of lowest pricing, it’s Amazon, Best Buy, Walmart, New Egg, Fry’s and Target.

While the insights above were unearthed by comparing the products of retailers against a sample of 1000 Amazon products, we went further and performed a separate analysis on a different sample of 15,000+ products across retailers, which focussed on the top 500 ranked products of each product type for Amazon, Best Buy, Target and Walmart. The product types considered include Digital Cameras, DSLRs, Headphones, Laptops, Mobile Phones, Refrigerators, Tablets, Televisions, USB Flash Drives and Wearables. 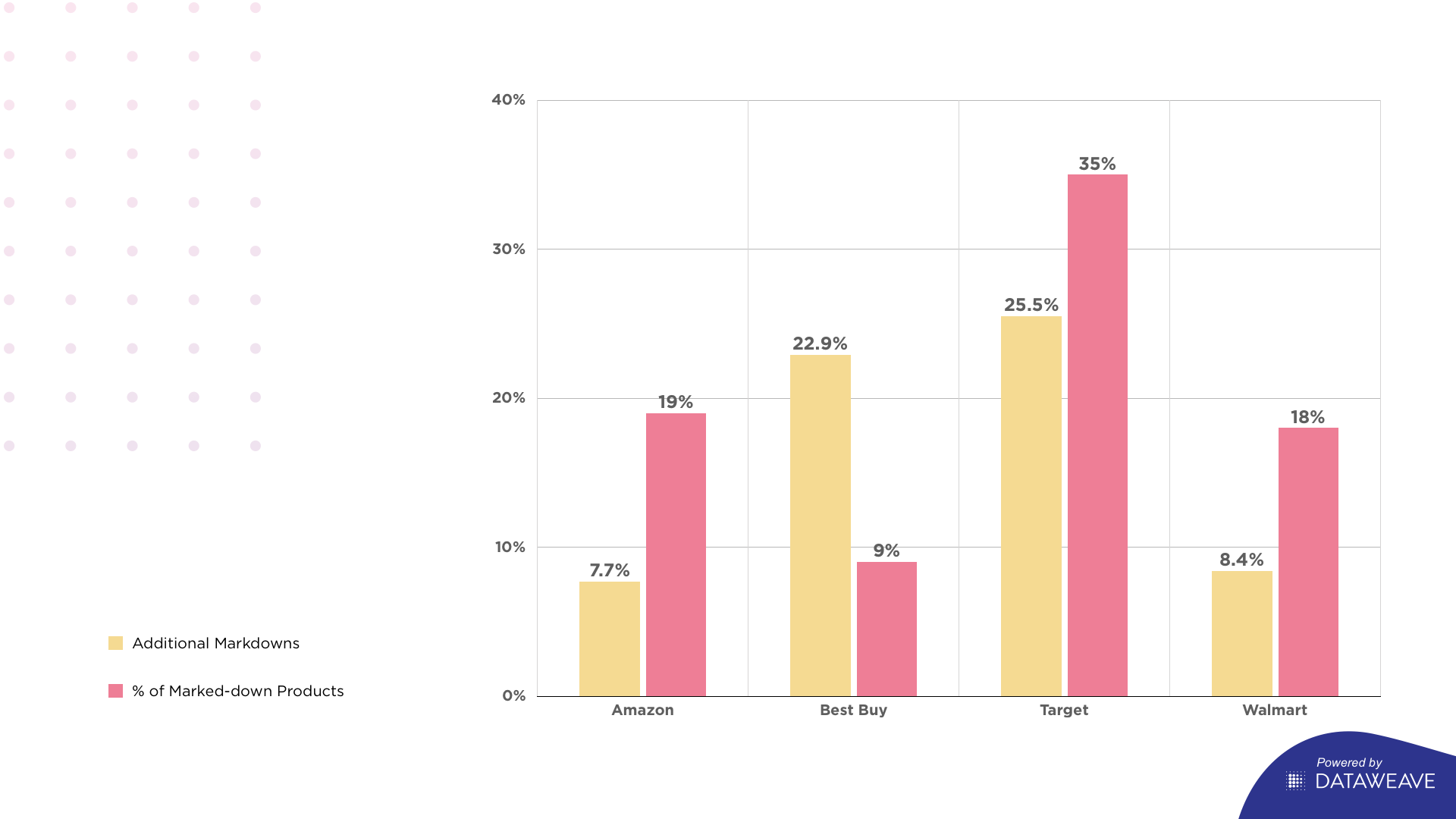 Looking at opposite ends of the spectrum, we find Amazon with the least drastic markdowns during the sale as it tends to consistently have lower prices across the board. At the other end, there’s Best Buy and Target with the most aggressive markdowns; Target taking the lead, 25.5% on 35% of its products, which is also consistent with the activity we observed in the previous sample of matched products.

Going further, we’ve broken down the markdown activity by the top product types for each retailer. Across the board, we observe attractive discounts on Headphones, USB Flash Drives and Mobile Phones. 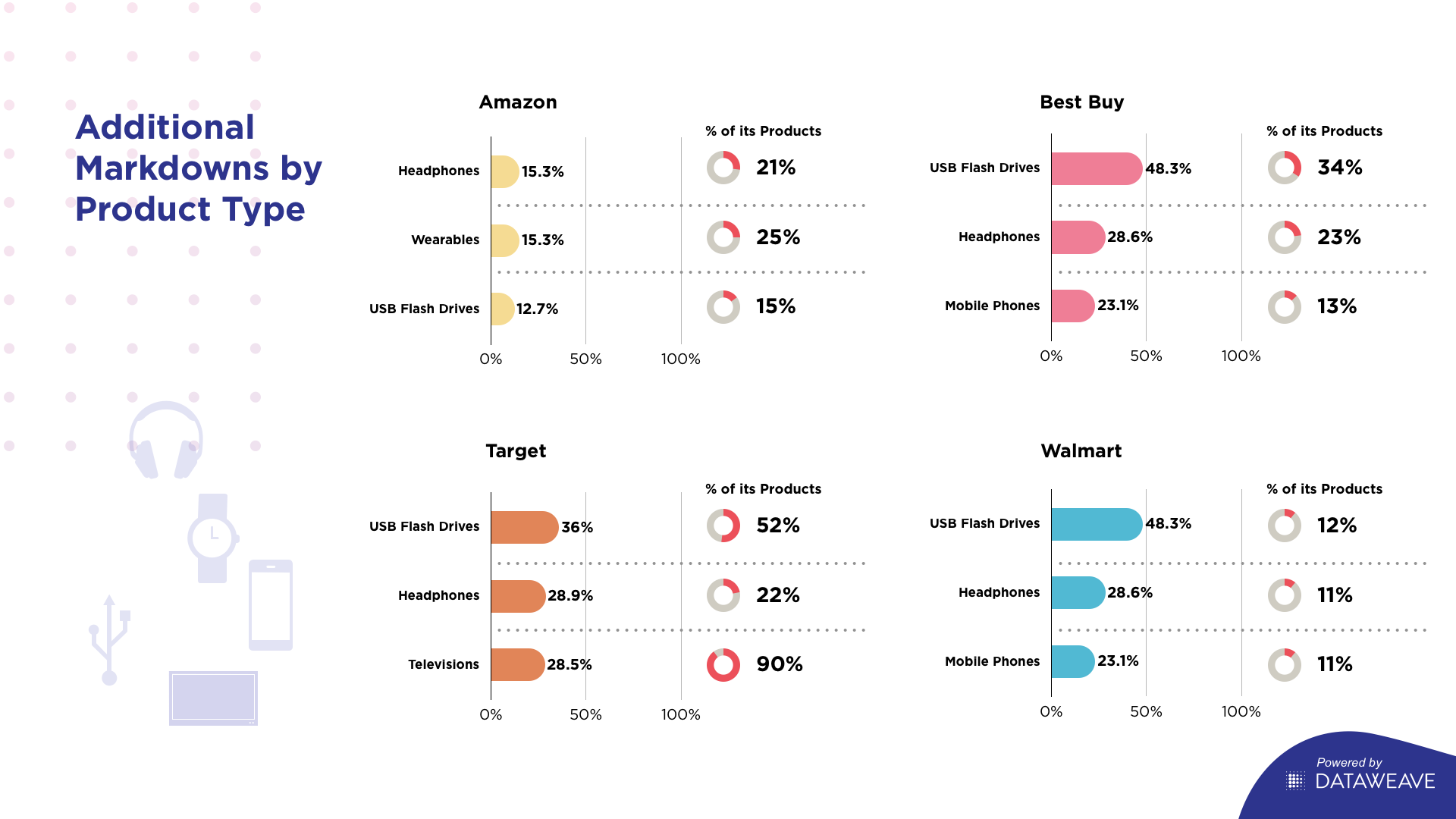 With the proliferation of pricing intelligence tools (often driven by algorithms), dynamic pricing is a commonly observed behavior among retailers. We analyzed this trend during the holiday period to identify the retailers that are most aggressive in their price change activity. The following charts reveal the number of price changes performed by retailers in our sample as well as the average price variation during this holiday period. 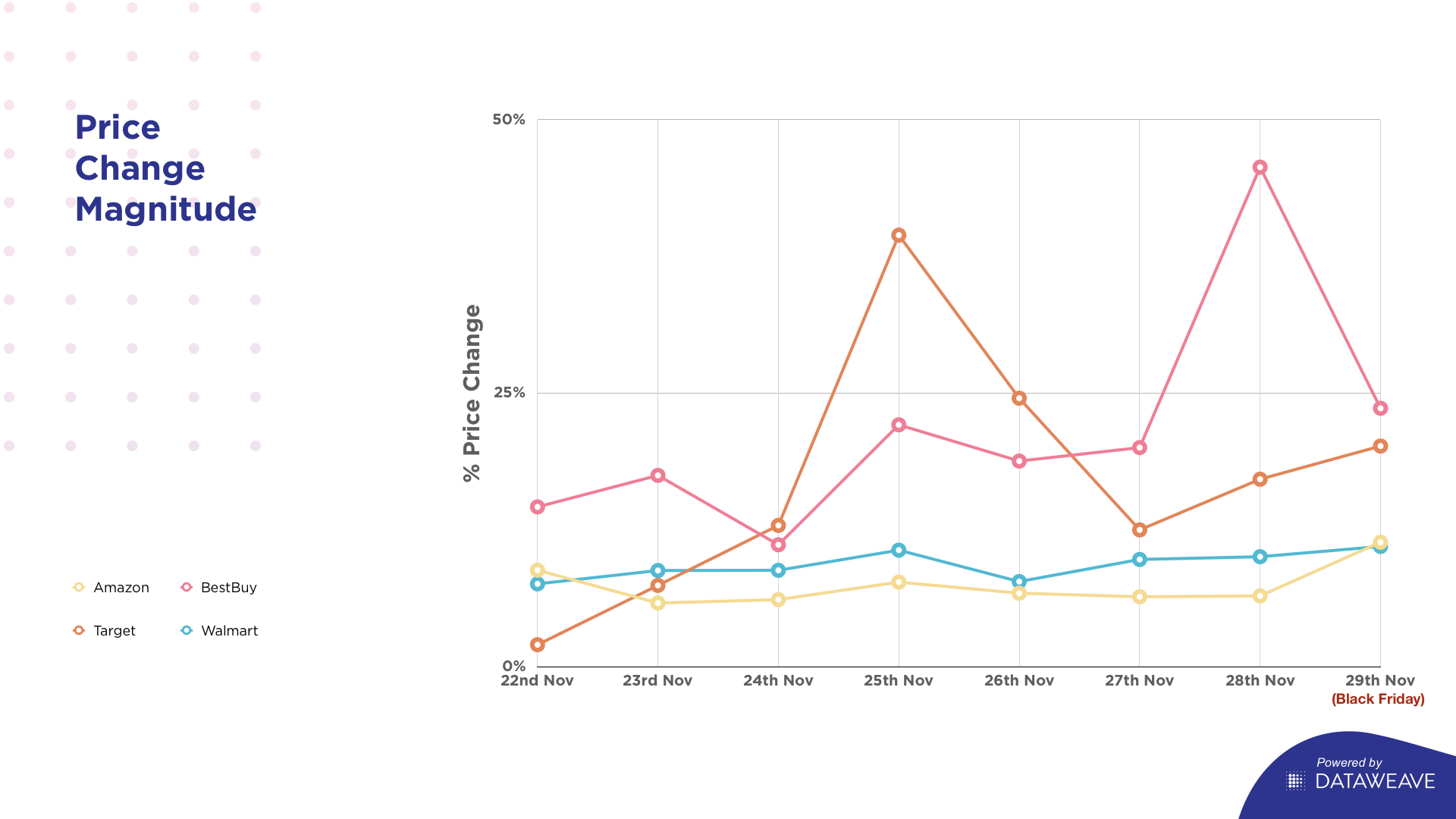 Amazon made several price changes during the week but with a relatively low magnitude, since it was the lowest priced anyway through the week. The only other player with similar activity was Walmart. Target and Best Buy had significantly fewer price changes but when they did make the changes, the magnitude was much larger. Their focus was solely on a smaller, select set of products where they went all in.

As the years advance, the duration of holiday sales is no longer restricted to the actual holiday, but the days preceding and following them as well. With more and more people getting increasingly comfortable with online shopping (14.1% increase from 2018), buying habits are evolving too. Big retailers are cashing in on this and driving their pricing strategies to keep up with the evolution.

One of the clear cut findings from our research is that there are two primary paths they take: smaller additional markdowns over a longer period and larger additional markdowns over a shorter period. Whichever path they choose, retailers need to be on top of the game with valuable insights, that give them a competitive edge. For accurate and large scale competitive intelligence, reach out to us.

Black Friday Sales Season: How US Retailers Are Gearing Up...

11 Reasons why your eCommerce Business is failing...

Natt Fry, a renowned thought leader in the world of retail and analytics, publis...