Of broken pumpkins and wasted lemonade

[The idea for this post was given by Mahesh B. L., who is a friend of DataWeave. We are going to have some fun with data below.]

Ayudha Puje (ಆಯುಧ ಪೂಜೆ) or Ayudha Puja marks the end of Navaratri. It is the day before Dasara. Ayudha Puje is essentially the worship of implements (or tools/weapons) that we use. While this is practiced in all southern states, since Dasara is Karnataka’s nADa habba (ನಾಡ ಹಬ್ಬ) or “the festival of the land” it is done so with added fervour in Karnataka. At least it does seem so if you see the roads for the next few days!

As part of Ayudha Puje, everybody washes and decorates their vehicles (well, they are our major weapons in more than one sense) and worships them by squashing a suitable amount of nice and juicy lemons with great vengeance. Ash gourds (Winter Melons) are also shattered with furious anger. 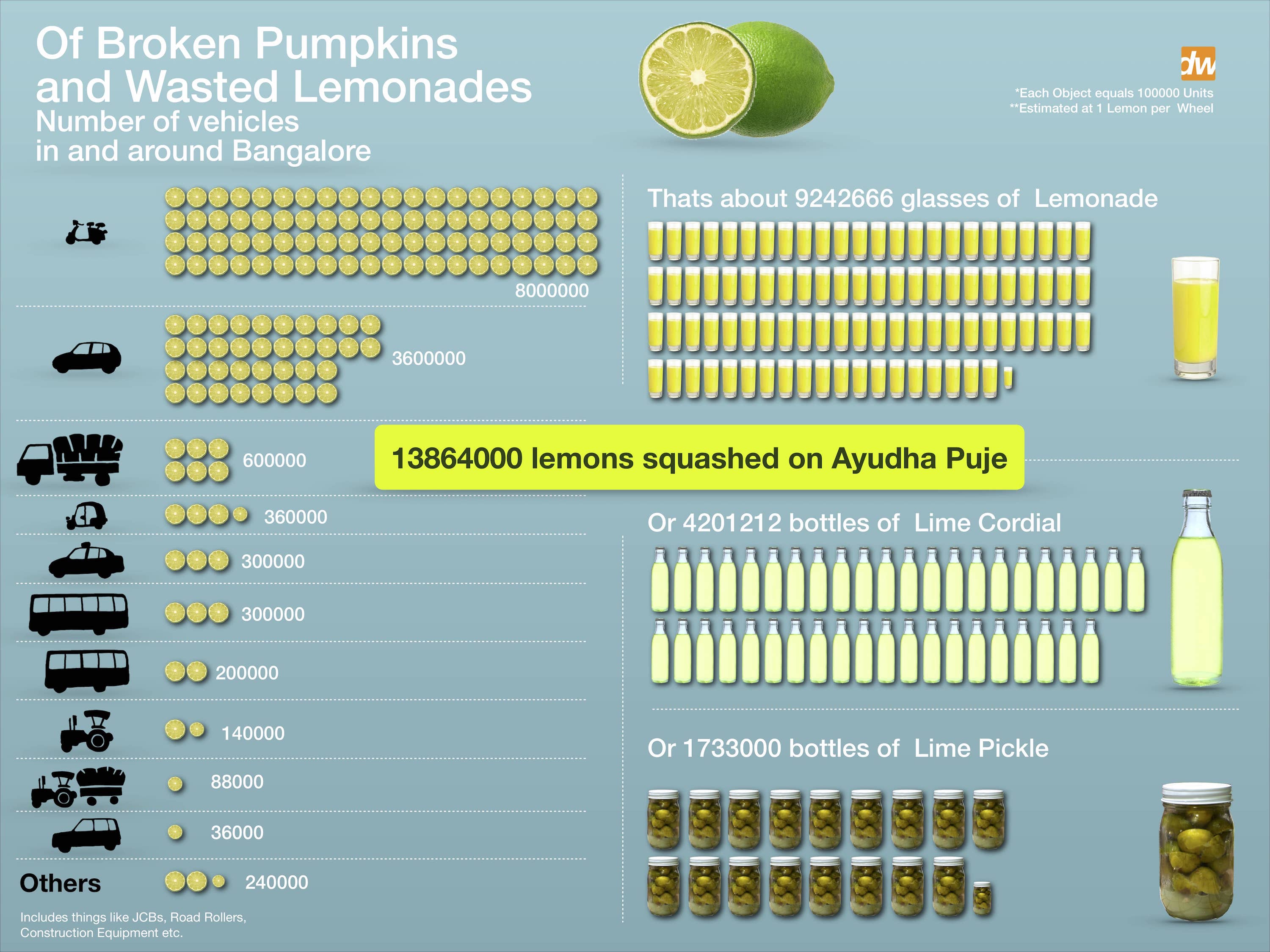 So, assuming one lemon per wheel, upwards of 13 million lemons got squashed on October 12, 2013 that could otherwise have been put to some good use such as preventing cauliflowers from turning brown, or serving Gin Fizz to an entire country. (Of course, we know that not everyone performs Ayudha Puje. But let’s not be insensitive to the plight of our victims by digressing.)

We don’t have an estimate on how many Ash Gourds were broken, but we are sure the quantity would have been at least enough to serve tasty Halwa to every person in Karnataka.

Do you want to do some serious analysis on Lemons and Pumpkins yourself? Take a look at our Commodity Prices API. Register to get an API key and start using it. Like this:

DataWeave helps businesses make data-driven decisions by providing relevant actionable data. The company aggregates and organizes data from the web, such that businesses can access millions of data points through APIs, dashboards, and visualizations.

Retailers really wanted to dress us up this holiday season. This year’s Black ...

Counterfeits pose a dangerous threat to any retail brand. Since every single sal...

7 Key Metrics that QSRs want (but may not get) from Food Delivery Apps...

How Healthy is Your Assortment?...

In 2021, both consumers and retailers seek better health. The pandemic has inspi...