A Study of Deals on Amazon Prime Day 2019 | DataWeave

Our preliminary analysis reveals that Prime Day 2019 had other retailers offering better deals than Amazon in many cases.

As Prime Day extended into an additional day this year, Amazon seems to be hitting the right note with its customers, going by the revenue it’s raking in. This year, the longest Prime Day event ever witnessed a sales increase of 72% – overtaking Black Friday and Cyber Monday combined.

At DataWeave, we were curious to find out how prime these deals were, and if in fact other retailers were offering better discounts. We started with the electronics category, which remains among the most popular categories year on year.

We tracked the pricing of several leading retailers selling consumer electronics to assess their pricing and product strategies during the sale event. Our analysis was focused on additional discounts offered during the sale to estimate the true value that the sale represented to its customers. We calculated this by comparing product prices on Prime Day versus the prices prior to the sale. Our sample consisted of up to the top 1,000 ranked products across 10 popular product types in consumer electronics on Amazon, Best Buy, Target, and Walmart. 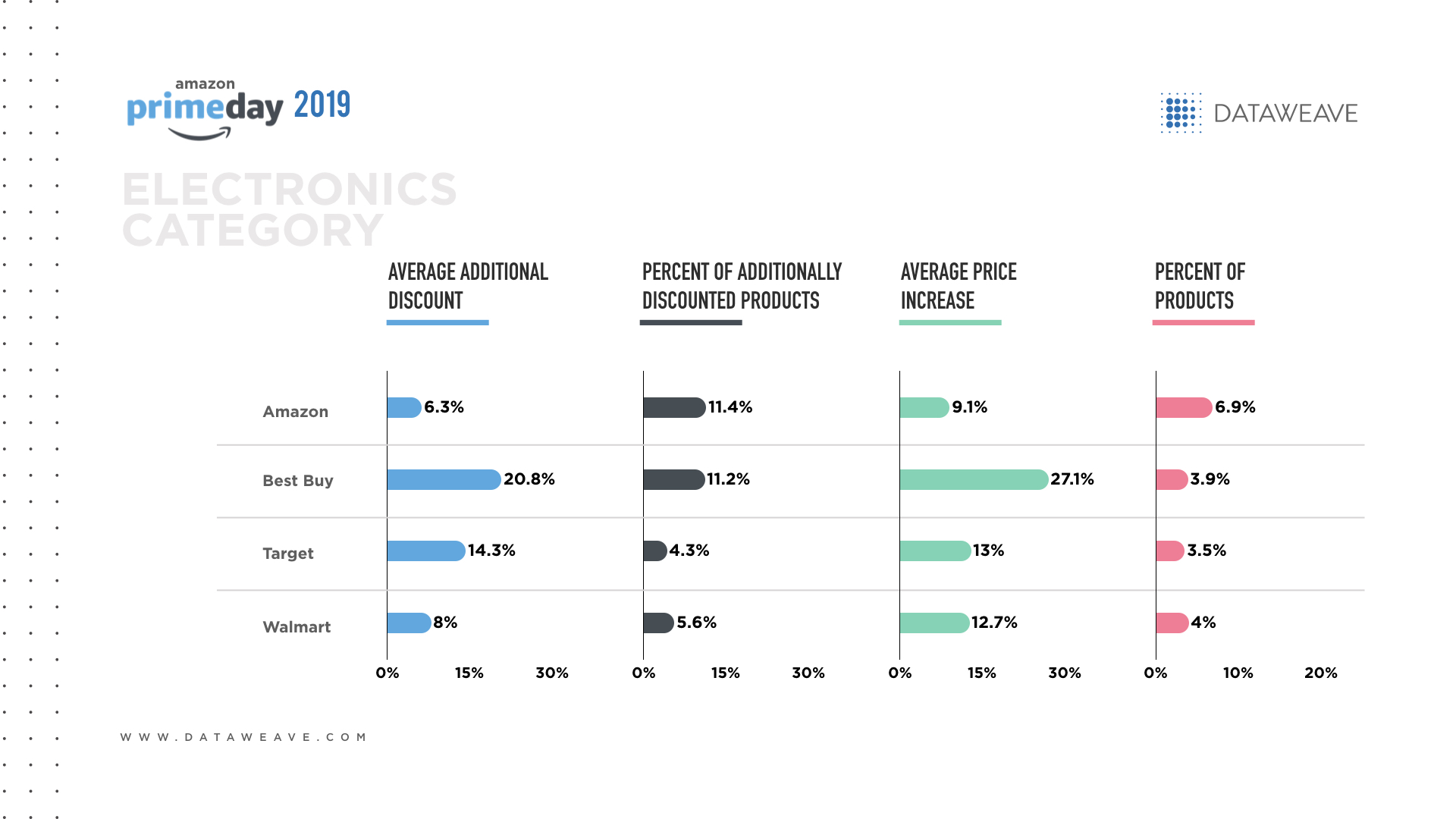 What we found most surprising was that across retailers, some portions of the assortment underwent price increases as well. While Amazon indicated the lowest increase at 9.1%, Best Buy indicated an increase as high as 27.1%. However, Amazon reported the highest percentage of products (6.9%) that showed a price increase.

Equally surprising was that Amazon reported the lowest price reduction at 6.3% – Walmart, Target, and Best Buy in fact reduced their prices by much larger margins than Amazon did. A point to note here, however, is that Amazon did report the highest percentage of additionally discounted products – with Best Buy coming in at a close second.

This goes to show that Prime Day, for all its hype, does not in truth offer the best deals to Amazon shoppers. This, of course, is expected based on the competitors’ perspective of wanting to avoid losing market share. As a result, shoppers would be well advised to compare prices across websites to find the best deal.

USB flash drives were a popular product category across all four retailers analyzed, with Best Buy offering the best average additional discount at 40.7%. Other popular product types ranged from the usual personal devices such as mobile phones, tablets, and smartwatches to home appliances such as refrigerators and TVs.

We determined popularity using a combination of average review rating and number of reviews, and the resulting scores were categorized as low, moderate, and high.

Interestingly, discounts were not found to be directly proportional to popularity. Except Walmart, all the retailers tended to offer the best discounts on products that enjoyed moderate popularity. This makes sense, since there isn’t a strong need to be aggressive on price for highly popular products in any case. On the other hand, products with lower popularity aren’t really worth promoting. Walmart, which was the exception, reported a higher discount on low- and high-popularity products than it did on moderately popular products.

The percentage distribution of products did mostly show a directly proportional relationship, with the highest distribution usually being offered for highly popular products. The exception in this case was Best Buy, which evidenced a much higher distribution in its moderately popular goods.

In general, all retailers were found to have slightly higher additional discounts in the lower end of the “premiumness” spectrum. This is still a smart move, as it enables sellers to save on margin while still promoting attractive discount percentages. Interestingly, Amazon offered the lowest additional discount – a flat 5% – across all categories, despite offering more or less competitive product distributions compared to other retailers. 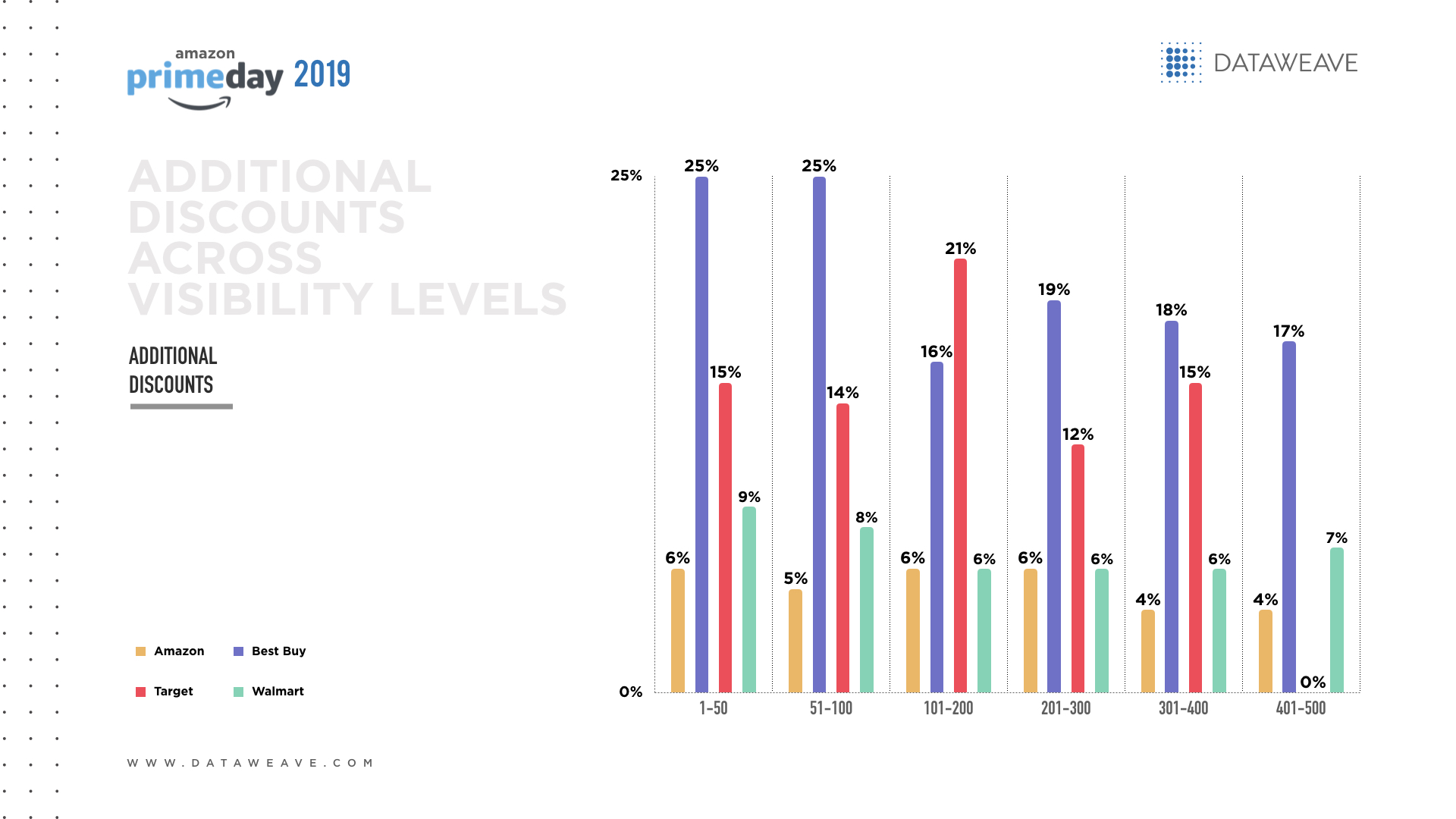 Here, too, the lower end of the spectrum mostly witnessed higher additional discounts. This tactic actually offers double benefits – one, the most attractive discounts are offered in the higher realms of visibility, thus effectively enticing consumers to buy these products, and two, it helps build a low price perception (despite this not holding good as one delves deeper into the higher ranks). Again, it’s interesting to note that Amazon didn’t offer the highest discounts here either – in fact, it mostly offered the lowest additional discounts.

All in all, it seems that Prime Day isn’t all it’s hyped up to be, at least not in the Electronics segment. How about other categories? Watch this space for more insights!

This year, shoppers will skip neckties and celebrate Dad with gifts for his home...

Discounts may have been scaled down as the e-commerce market matures and the gov...

Top 10 Retail Analytics that You Must Know...

Retail Analytics help merchants to understand their customers, how to increase s...

For today’s shoppers, instant gratification is the need of the hour. It...